I had the problem of adding the aFileChooser library and here is how I solved it.
First you need to download the zipped source code from here:
https://github.com/iPaulPro/aFileChooser
Then I unpacked it 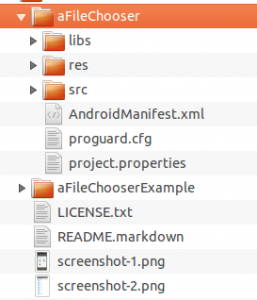 As I did not need the examples I only copied the aFileChooser directory into my existing Android project directly under the /lib directory. I like this as this will provide me with all code that I use in one directory. 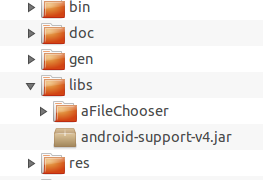 Then in Eclipse you have to open the library as a NEW project by selecting:
File -> New -> Project… 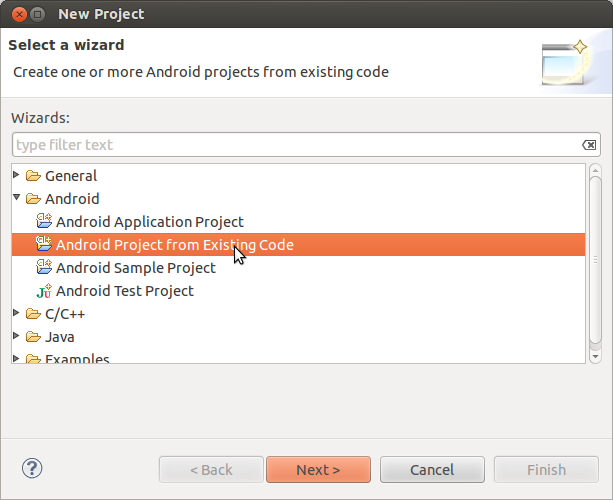 Next you will need to add the aFileChooser library to your project.
You do this by selecting your project in the explorer and right clicking on it’s name. This will open the context menu where you have to click on Properties to get to the following screen. 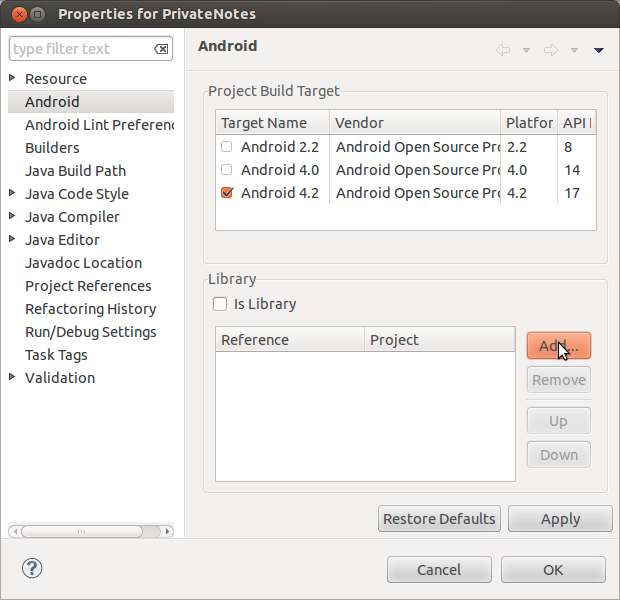 By clicking Add you can then select the aFileChosser library. 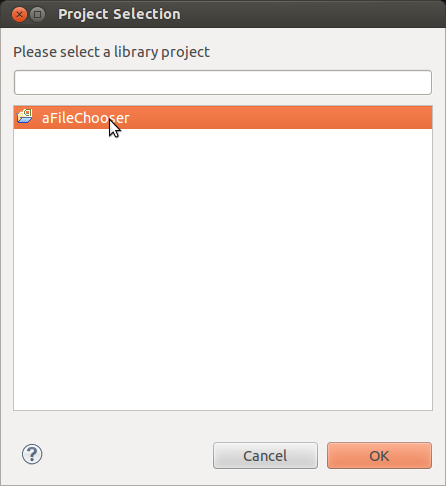 Press OK on this and the previous dialoge.

If you are unlucky like me you will now see an error occuring as your own project and the aFileChooser library project have under their respective /lib directory the same JAR file “android-support-v4.jar” but of different size and therefore version.

Just copy your android-support-v4.jar file to the /lib/aFileChooser/lib folder and press F5 back in Eclipse to get a refresh.

Nexus 10 does not attach itself as a USB storage card. Instead it uses the protocols PTP and MTP. The former is quite nicely supported on my Ubuntu 11.10.
-I know I should upgrade-.

So what happens? First of all nothing! If you attach the Nexus 10 via USB there is no notification on ubuntu. On the Nexus you get a little status hint (upper left corner a box with an arrow inside) that there are now some USB actions available. From the status you can directly jump into the USB settings where you find two possible connection modes. The ticked default mode is MTP.
If on your Nexus you now tick PTP, Ubuntu immediately detects a camera device and opens up the Nautilus explorer showing the DCIM folder and you can access the files.

But I just wanted to put some music on the new device and I don’t want to slingshot it from my PC to some internet server and then back to my device. After all they are just 10cm apart from each other right in front of me?!

So next thought is to look for an application that advertises MTP capabilities and the Ubuntu Software Center shows me gMTP.

After installing gMTP it works. Not automatically, you still have to fire up gMTP manually and at first you do not have access to any files but if you open the file menu of gMTP and select “Close devices” (hope this is the correct English translation) you get the content of your Nexus.

Transfering mp3 files is now possible but is a bit cumbersome. Every file requires to be OKed with an error message. But finally they end up on the Nexus and can be used and that’s what I wanted in the first place.

Creating folders is possible and while I am at it, I uploaded some pdf files to the Nexus, which were all uploaded without complaints and error messages in an instant.

A word of caution I also tried the application Qlix in my case version 0.2.6 on Ubuntu. Well and I failed, it just started shortly and stopped after a second and that’s it, no error no nothing. It might be a good and don’t forget free application and for other devices it might even work perfectly but what nagged me here is the fact that there is no hint from the GUI.

Starting it from the console reveals a bit more information. There you get the info that you should report the device ID to the libmtp team.

“Device 0 (VID=18d1 and PID=4ee1) is UNKNOWN.
Please report this VID/PID and the device model to the libmtp development team
Ouch! – Qlix received signal 11”

So overall file transfer is possible but not yet perfect.